The Killing Fields and Genocide Museum 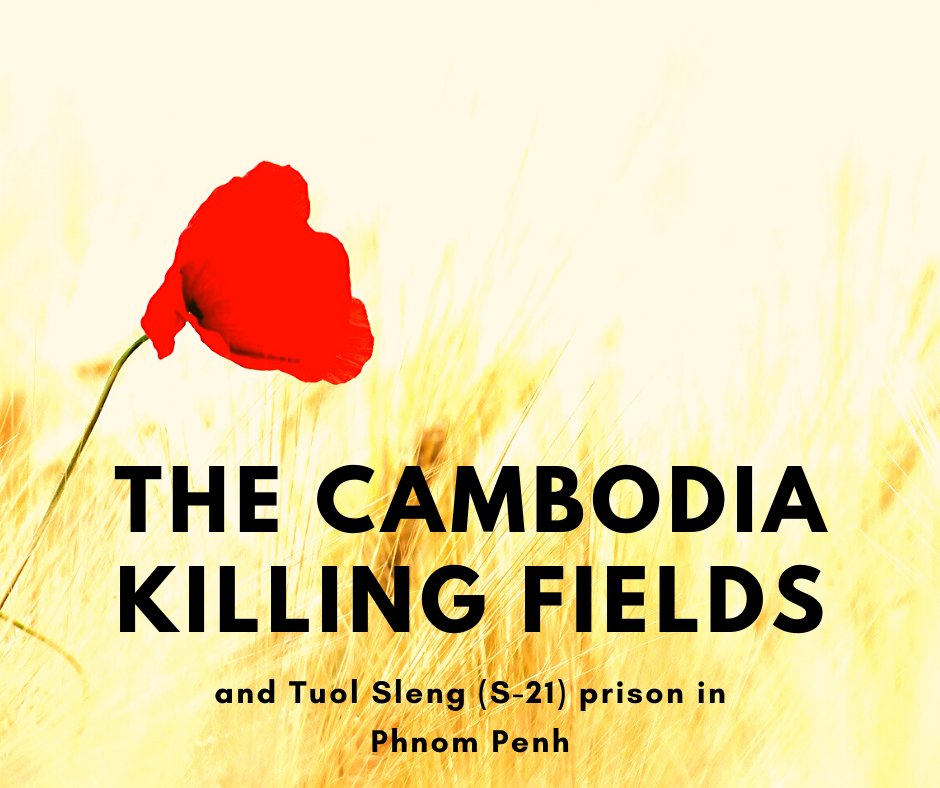 On my first visit to Cambodia in 2008 I knew little to nothing about the shocking events that had happened here. Sure, I had heard about the killing fields and Khmer Rouge, but no details. As it turned out I wasn’t prepared and the whole thing caught me completely off guard.

From 1975 to 1979 a mass genocide took place in Cambodia killing an estimated 2 million men, women and children. This accounts for 25% of the total Cambodian population at that time. The killing fields and the genocide museum in Phnom Penh are the most important monuments of the dire events.

A visit to Phnom Penh is not complete without visiting these monuments for two reasons. First of all, to get a better understanding of Cambodia’s darkest hour. Secondly to pay your respects to the victims and survivors.

In 1975 the Khmer Rouge (communist party) took control of Cambodia after defeating the Khmer Republic government in the civil war. The Khmer Rouge leaders wanted to achieve national self-reliance by implementing an initial phase of agricultural collectivism.

This first phase was to be followed by a rapid social transformation. The Khmer Rouge aimed for industrial and technological development without assistance from foreign powers. Also, the Khmer Rouge believed in national purity.

For the initial phase the Khmer Rouge drove the entire population out of the cities and into the country to work on the fields. Due to severe mismanagement most crops failed, which started a famine.

The leaders insisted on self sufficiency, even with regards to the (non) supply of medicine. Because of this, many Cambodians died from otherwise treatable diseases.

Teachers, doctors, lawyers, were all considered “intellectuals” and not suitable for re-education, but subversive to the regime. It is said that even wearing glasses was looked upon as a sign of intellect and therefore suspicious.

“Intellectuals” were persecuted and some of them were sent to work camps, but more often they were brutally killed. Likewise, Muslims, Christians, minorities and people of mixed ethnicity were seen as a threat to the pure Khmer race and suffered the same faith as the “intellectuals”.

As a result, people lived in a “society of fear” and turned in their neighbors, friends or family. They desperately wanted to show their loyalty to the Khmer Rouge to prevent them from being accused themselves.

In 1979 Vietnamese troops invaded or liberated (depending on who you ask) Cambodia and ousted the Khmer Rouge. However, the UN still recognized the Khmer Rouge as the legitimate government of Cambodia until 1989. Finally, the Cambodian-Vietnamese war officially ended in 1991 with the signing of the Paris peace accords

A former secondary school in Phnom Penh was transformed into security prison S-21 by the Khmer Rouge. Nowadays it’s the Tuol Sleng genocide museum. “Intellectuals” and other suspected subversives were taken to S-21 for interrogation. They were tortured until they confessed to whatever they were charged with and then killed.

An estimated 17,000 people were imprisoned at S-21, which was only one of at least 150 torture camps in Cambodia. Bodies were initially buried near the prison site. By 1976, prisoners were transported to be killed and buried at the Choeung Ek extermination center just 15 kilometers outside Phnom Penh, because of a lack of burial space at the prison.

The Khmer Rouge documented everything, because the signed confessions would justify what they were doing. Perhaps, the Khmer Rouge realized there was going to be an outrage when the world would find out.

Thousands of portrait photos of the prisoners are displayed in the museum. The photos were taken from the dossiers, which over time somehow got separated. Therefore most people in the photos remain anonymous until today.

Furthermore, the museum also displays the prison cells and torture rooms as well as photos of mutilated corpses that were found by the Vietnamese army when they arrived.

Strange enough, it was the portrait photos that got to me. Even more so than the torture tools. The photos literally sent chills down my spine. All these faces of men, women and children staring me straight in the eye. Some of them frightened and desperate, others apathetic or with strained grins. What went through their heads? Did they know what was coming?

Tuol Sleng Genocide Museum: St 113, Phnom Penh. Opens daily from 8am to 5pm. Admission $5 and $3 for the audio tour, which I highly recommend. No dress code, but please dress respectfully.

Scattered throughout Cambodia almost 20,000 grave sites were discovered, confirming 1,4 million victims of execution. “Boeung Choeung Ek” (crow’s feet pond) is believed to be one of the biggest mass graves, also known as “killing fields”. After the fall of the Khmer Rouge regime, 8,895 bodies were found here. Most of the victims were prisoners from the S-21 prison in Phnom Penh.

A group of peasant teenagers was appointed to carry out the killings. To save on ammunition they used iron bars, pickaxes, machetes and sharpened bamboo sticks. Infants were killed by having their heads bashed against trees so they would not grow up to take revenge for their parents’ executions.

Thousands of human skulls that were excavated are displayed behind glass panels of the Buddhist stupa that marks the Choeung Ek memorial. The grounds at Choeung Ek are green and peaceful now. However, many bodies still lie buried in the shallow graves. It’s very disturbing that after heavy rains, fragments of human bones are unearthed and visible throughout the area.

I struggled to keep my posture, but when I got to the tree where the infants were killed I was unable to hold in my emotions. While trying to grasp the horrors that happened only 30 years ago it hit me. Every other person I met and still would meet in Cambodia had gone through this gruesome period. Above all, it really made me appreciate their resilience and strength. At that moment I was thankful that through my visit I could pay my respects to the people of Cambodia.

It’s perfectly possible to combine the Killing Fields and Genocide museum in half a day. The easiest way is to charter a tuk-tuk for half a day. Cost will be about $20 or a bit more, depending on your negotiation skills.

If you feel more comfortable visiting the Klling Fields and the Genocide Museum on a tour than make your choice from the available tours below:

Do you feel that vacation should only be about fun or does it also make sense to visit memorials? Let us know your thoughts in the comments below.

We’re in Spain at the moment. Moraira (Costa Blanca) to be precise. Are you anywhere near? Wanna meet up, grab a beer and share some stories? Let me know here