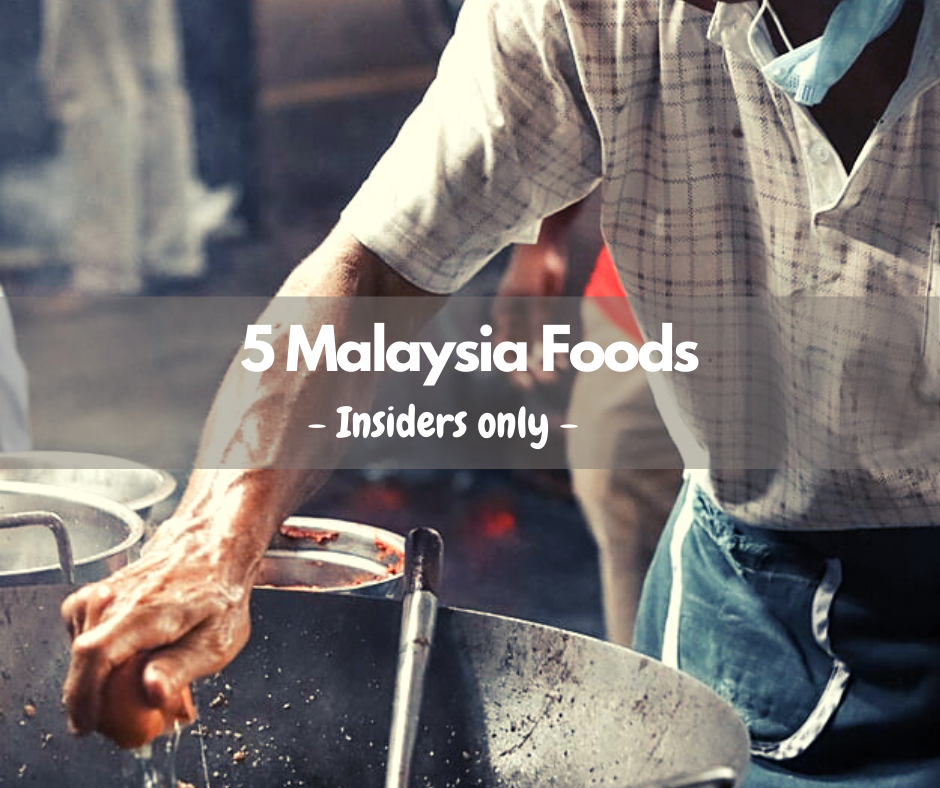 I don’t know about you guys, but I am crazy about Malaysia food. It’s just so tasty and spicy I can’t get enough. In a way it’s different, but at the same time it’s very familiar. Even if you try Malaysia food for the first time I’m sure you will recognize some of the flavors.

Like Chinese and Indian flavors, but also Indonesian and Thai. It’s because, over time, immigrants from nearby South East Asian countries heavily influenced Malaysian cooking. Some of these immigrant fusion cuisines have grown into an important part of Malaysia’s culinary heritage.

If you’re not new to Malaysia food, you’re sure to know the usual suspects like Nasi Lemak, Nasi Kandar and Laksa. How about Roti Canai and Hokkien Mee? I describe them all and more in my previous post “11+1 Must-eat Malaysia Foods” about accessible and available Malaysian dishes that represent some of the best stuff that Malay cuisine has to offer.

However, this article is not about the popular dishes. It’s about the dishes that you won’t normally come across unless you frequent the real local eateries in Malaysia. Delicious nonetheless and definitely worth to look out for on your next visit to Malaysia. So here’s my list of 5 Malaysia foods for insiders.

Otak Otak literally translates into “brains”, but don’t worry, I am not promoting to really eat brains. The soft feel and appearance of this dish is said to resemble the grey matter. Well maybe with a little imagination it does, but that’s where all similarities stop.

It’s fish, usually Spanish mackerel, stirred into a paste and mixed with ground garlic, onion, lemongrass, turmeric, galangal, belacan, chilies and coconut milk. Small portions of the paste are wrapped in an attap (nipa palm) leave and just before closing some shredded daun gaduk (wild betel leave) is thrown in. Often, banana leaves are used for wrapping instead of attap, because of availability.

The parcels are roasted over a charcoal fire and the result is a smooth, spicy and peppery fishcake, great with steamed rice or as a side dish snack. Steaming, slow-frying and baking is also possible, but it won’t be the same. Otak Otak needs the smokiness from the charcoal and somehow the coconut milk reacts different to the heat giving it a more moist and creamy texture.

More fish, because we can! Originally from Indonesia, Asam Pedas has become a Malaysia food classic. Next to the fish, tamarind is the real star of this dish.

Sour, salty, fishy and very, very spicy is what sums up Asam Pedas. Some call it a fish stew, but actually the fish, either whole or in chunks, needs to stay firm so it’s only added at the last moment. Usually Spanish mackerel or stingray is used, but any firm sea fish will do as well.

As said, tamarind is the star. The fruits are boiled, soaked and squeezed for the juice. It’s a lot of work though, so alternatively tamarind paste can be used. Other basic ingredients are ginger, belacan, garlic and chilies. Additional herbs and seasonings might vary per region or chef.

First, the spices are fried and next the tamarind juice is added together with tomatoes, okra, fresh coriander and cooked into a broth. Finally, add the fish to the broth until done and serve it with steamed rice.

If you want to give Asam Pedas a try, the best place is in the Southwest coastal town Melaka. The local restaurants there seem to have specialized in preparing this wonderful dish.

Probably this dish needs no introduction, as I am sure you’ve all heard of it. Brought to Malaysia a long time ago by Indian Muslim immigrants and grown into a Malay staple food. Bless the immigrants for giving Kari Kambing to the world!

The goat meat simmers in the curry for hours until it’s ready to fall apart and the reduced coconut milk mixes in with the boiled down potatoes into a soft granular texture. Best served with steamed rice or roti canai and best eaten at one of the numerous Mamak food stalls.

Locals always prepare an enormous batch when cooking Kari Kambing, because it’s even better the next day.

Have you ever eaten blue rice? I have to admit that I had never even seen or heard about blue rice, let alone eat it. Until I met Nasi Kerabu, and it was love at first sight.

The blue color is derived from cooking the rice with the bunga telang flower, officially named “clitoria ternatea”. I swear I’m not making this up, apparently it has something to do with the shape of the flower. It doesn’t really do a lot with regards to flavor, but the blue rice sure looks pretty.

The rice is accompanied by an herb and vegetable salad. The herbs in the salad will vary according to availability, but can contain finely shredded kaffir lime, lemongrass, mint, wild betel, turmeric leaves and torch ginger flower. Usual (raw) vegetables are cucumber, beansprouts, longbean and cabbage.

Next to the salad several side dishes can be served, like salted duck eggs, fried chicken, fried or salted fish, shrimp crackers, green chilies stuffed with fish flakes and grated coconut, spicy sauce with fermented fish paste and a good amount of sambal.

With that many condiments a good Nasi Kerabu takes time to prepare. It’s certainly not easy to recreate at home. Maybe it’s best to enjoy this complex and pleasing to the eye dish at the source of its origins anyway. So, head for Kelantan province in the Northeast of Peninsular Malaysia.

Find your accommodation in Malaysia with Agoda.com

Malay are all about food and they are insatiable sweet tooth’s. They really love their cookies, and so do I! Or actually, Kuih is so much more than just cookies. It’s also pudding, puffs, cakes, pies, crepes, wafers, dumplings, fritters, biscuits and what else. As long as it’s bite sized and high on sugar you can probably call it Kuih.

Now I grew up in Europe in an Indonesian family and Malaysian “Kuih” is kinda similar to Indonesian “Kue”. I still have fond memories of the aunties coming to visit, knowing they would always bring large quantities of Kue goodness. However, Malaysia took Kuih to another level. Especially Peranakan culture in Malaysia got really creative with many of the traditional recipes. As a result, there seems to be no limit to the amount of choice for Kuih in Malaysia.

Many Kuih involve glutinous rice, coconut and gula melaka (palm sugar), but certainly not all. Likewise, many Kuih are steamed, but it’s not a rule, there are also numerous fried, baked, grilled and even raw Kuih.

Kuih in Malaysia is an absolute must-eat, so if you haven’t tried it yet, you’re selling yourself short. Look out for the most colorful stand in any Malaysian market, if it also happens to be the busiest stand, they’re probably selling Kuih.

I hope you enjoyed reading about 5 Malaysia foods for insiders. Make it your quest to try out these dishes next time you’re in Malaysia. Or, maybe you already have? If so, let us know how you liked it in the comments below. Also drop your comments about any other Malaysian insider foods that we should know about. I’m always down to try something new.

We’re in Spain at the moment. Moraira (Costa Blanca) to be precise. Are you anywhere near? Wanna meet up, grab a beer and share some stories? Let me know here